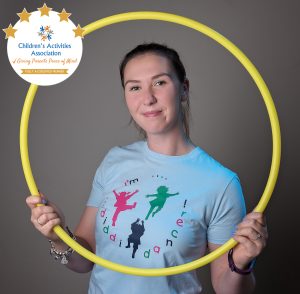 The team at diddi dance, the brand behind the much-loved preschool dance classes, are extremely proud to announce their franchise diddi dance Bristol has achieved Gold accreditation from the Children’s Activities Association (CAA). The CAA is the only not-for-profit, industry-led association to set and raise standards in all organised children’s activities across the UK and this achievement clearly showcases the team at diddi dance Bristol’s passion for excellence.

Over 200,000 children a week now attend a CAA member activity and it is a truly fantastic endorsement for diddi dance Bristol to be part of this ground-breaking national initiative. Emily’s commitment to achieving Gold for her franchise shows her dedication to demonstrate to her industry peers and her fellow diddi dance franchisees that she excels at what she does as well as giving her parents the reassurance they deserve when selecting the best classes for their little ones.

Emily took over diddi dance Bristol in December 2014, but previously was a teacher for the franchise since November 2013, and has since gone on to grow it into one of the most profitable & recognisable diddi dance brands in the nation. Becoming a Gold accredited member of the CAA is the latest achievement in Emily’s successful year as this follows on from her recent win at the EWIF Awards for Young Woman in Franchising.

‘With so many clubs and classes to choose from it’s so hard to know which are the best and what I should be asking when I leave my children in the care of a class leader. In the past I just wrongly assumed kids’ activities must have to be regulated. Knowing that the CAA has asked those important questions to help keep my child safe is fantastic – so now I just look for their logo!’

Having achieved Gold CAA accreditation means that diddi dance Bristol has been independently verified as having met or exceeded all the necessary elements of the CAA Code of Practice. Assessed by Dr Amanda Gummer PhD, one of the UK’s leading experts in child development and Founder of Fundamentally Children, the CAA’s official independent accrediting organisation, this accomplishment offers parents peace of mind when selecting an activity from the myriad of providers out there.

Anne-Marie commented on the accreditation process and Emily’s success:

Using the CAA accreditation system to ensure all our franchisees are performing to not only our high standards but also a nationally recognised association too is so important to us. It’s fantastic seeing our thirs franchise gain gold accreditation. Emily is a fantastic franchisee with drive, motivation and a fabulous leader in class. This gold accreditation is very well deserved of this award winning diddi dancer”

Adding to this Emily of diddi dance Bristol said:

It gives parents peace of mind that they are in a safe class and it is age appropriate for their child. [It also shows] that I am committed to giving 110% to all my customers and ensuring that diddi dance Bristol is at the highest standard a preschool dance class could be.”

Congratulations again to Emily and her franchise. If you would like more information about diddi dance Bristol visit the Facebook page here or read all about them by clicking here