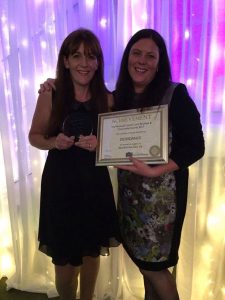 The awards were created to recognise, reward and celebrate fantastic individuals and businesses in the Plymouth area. Liz & Rachael, who run diddi dance Plymouth & Surrounding, were nominated alongside Hartbeeps & 2 Counties Plumbing for the Best Business Start-Up awards and on 22nd September they were announced as the winners!

We asked them how it felt to be recognised by their local community with this award and they said:

We are delighted and shocked to have been nominated & shortlisted for this award, it’s lovely that a member of the public has taken the time to nominate us for Best Start-Up Business. We have worked very hard over the last 12 months but have loved every minute of it. We had such a fab evening at the Woolwell Centre Local Business & Community Awards. When they announced that we won the Best Business Start-Up award we were both gobsmacked!!  It means so much to us that people really love what we are doing and even better that it’s getting our name out there – it feels like we’re doing something right!!”

Once again congratulations ladies and we can’t wait to see what the next 12 months hold for you.